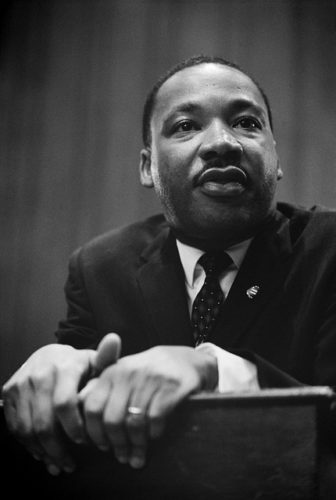 This month many countries celebrate Black History. Ever wonder about the astrological profile of one of the greatest leaders of the Civil Rights Movement in the US?

Martin Luther King, Jr. is a Capricorn. Some astrological signs are content to go with the flow or let others lead the way. Not Capricorns. At their best, they’re wise, ambitious and patient, but at their worst, they are pessimistic, unforgiving and stubborn. There’s no in between for this sign.

Martin Luther King, Jr.’s astrological chart tells the story of this amazing Capricorn — a truth-teller, rousing public speaker and light-seeker who was ahead of his time. Let’s look closer at this leader whom we honor during Black History Month.

Born on the Mid-Heaven

The son of a Baptist minister, Martin Luther King, Jr. was born on Tuesday, January 15, 1929 in Atlanta, Georgia. He was born at noon when the sun was at the top of the sky, or on the “mid-heaven,” which describes someone who is destined for fame. King was as solid as a tree — unwavering in his commitment to his cause with a message that continues to grow 40 years after he was killed. So many aspects of King’s astrological chart point to his resonant message, his eloquence and his lasting impact. He’s an example of Capricorns at their best. Learn more about Capricorns’ characteristics.

Martin Luther King, Jr.’s Sun sign was in Capricorn and in the 9th House, which made him an organized leader and helped him focus on the content of people’s character rather than the color of their skin. The planet Mercury is associated with communication and was in Aquarius on King’s chart, a sign that governs activism, civil rights and team work. If you’ve read any of Martin Luther King, Jr.’s writings or have heard any of his speeches, then you know the dynamic power of having Mercury in Aquarius. King spoke with such passionate eloquence, people couldn’t resist his message. The planet Mars was in Gemini in King’s natal chart, which further points to his gifts as a passionate orator.

Both the Moon and Venus were in Pisces when Martin Luther King, Jr. was born. Since Venus is the planet of love, harmony and peace and the Moon is the ruler of emotion, it’s no wonder the message of the Civil Rights Movement was love and peace. King’s South Node was in Scorpio, which highlights his fearlessness in the face of frightening situations. King’s North Node, or calling, and his Rising sign were both in Taurus. This particular placement highlights Martin Luther King, Jr.’s determined adherence to his cause despite seemingly insurmountable obstacles. Taurus rising also speaks to some of the seemingly simple steps King and his followers took that had a profound, lasting impact such as the Montgomery bus boycotts and lunch counter sit-ins.

Capricorns as Agents of Change

So much of what Martin Luther King, Jr. did demonstrate his character as a Capricorn, and his lasting legacy speaks to how he used his powerful voice for the benefit of others. He was a futurist who didn’t waver in the face of adversity. Absolute in his beliefs and his drive to change the planet, King worked for the collective good and transformed the planet in the process. MLK is the perfect example of how an astrological reading can reveal so much about character–he did not stop, even when he received a death threat the day before he was gunned down at the Lorraine Motel in Memphis, Tennessee when he was only 39 years old.

Martin Luther King, Jr. is also the perfect example of how powerful astrology can be. Just by examining his astrological chart, we can see he was destined for the kind of greatness that transcends only one person, one place or one time. To learn more about any of the signs of the Zodiac or the four elements, contact me, Debra Silverman.

To learn more about astrology contact us with any of your questions and to set up a free consultation via email.